Two million Jeeters are smoked in a month in California. The brand Jeeter is beloved in the largest legal cannabis market in the country. So beloved, in fact, that it’s the only cannabis preroll brand that has become its own name. People don’t call these “prerolls”—they call them “Jeeters. “ 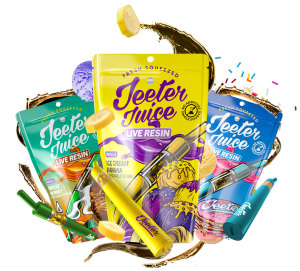 Jeeter is run by a close-knit crew of friends who have been working together for 15 years. “It’s a family,” says Lukasz Tracz, who is the co-Founder and co-CEO alongside Sebastian Solano. Other founding members include Scot Garrambone, Chief Financial Officer, David Solano, Chief Sales Officer, and Peter Dimirov, Chief Product Officer. In addition to the founding crew are team members Patryk Tracz, VP of Marketing, and Emir Duru, with the coveted role of Vibes Director. The entrepreneurs hail from the entertainment industry. They are also the founders of a beloved string of EDM events including the paint-throwing extravaganza Life In Color, Electric Zoo, and Tomorrowland.

The name Jeeter was coined in Florida in 2004 as slang for a joint, says Tracz. The brand launched in California in 2018. Dreamfields, also founded in California, is the parent company of Jeeter. Alongside its prerolls and infused prerolls, Jeeter produces vapes with oil and live resin. Selling its flower in bud-form is on the horizon.

Today, Jeeter operates on a 4.2-acre campus located in Desert Hot Springs, California. The Jeeter campus is comprised of an 18,000-square-foot facility where the brand manufactures, fulfills, produces, and distributes its product lineup. Jeeter employs 700 people and aims to have almost 1,000 employees within the next few months.

Jeeter is the fastest growing brand in the preroll category and holds the title of the best-selling preroll in the country with over 40% of California’s coveted market share. On top of its widespread consumer popularity, Jeeter is often smoked by celebrity fans including Issa Rae, Dwayne Wade, The Game, and more.

The brand created its own holiday akin to 4/20 called Jeeterday. This year, Jeeterday is on November 6, 2021. This is a consumer celebration with a limited-edition strain (2021’s is Banana Peel) and exclusive merchandise found at 115 stores across the state. There are often lines out the door for the special Jeeterday drop. This year culminates with Jeeterday’s first-ever in-person event, a concert featuring Ludacris and the Martinez Brothers.